As a puppy buyer: You want a puppy that will lead a long, healthy life you want to ensure the puppy's parents are not affected by the most common diseases of the breed.  The only way to ensure the parent's are not affected is for them to have health clearances for these common diseases
For genetic diseases a dog is rated: clear, carrier, or affected.

"Clear" means the dog posses no copies of the mutant gene for a disease; it will never have the disease or pass the disease on to its offspring.

"Affected" means the dog posses two copies of the mutant gene; it will have the disease/ be affected by the disease in its lifetime.  "Affected" dogs should only be bred to "Clear" dog's to ensure they produce no "Affected" dogs, but all puppies produced in such a mating would be "Carriers" of the disease.  If bred to a "Carrier" or "Affected" dog of the same disease, "Affected" puppies will be produced.

OFA Hips: This tests for hip dysplasia.  Hip dysplasia is a condition which causes abnormal changes to the hip joint, often causing lameness and pain.  Hip dysplasia can be mild enough that the dog shows no lameness or can be so severe the dog limps and requires medications to control pain.  Hip evaluations should be done for every breeding dog.  Just because a dog's parents have hip clearances doesn't mean that dog does not have hip dysplasia.  Dogs cannot be "normal/good by parentage" for hips.  Hip evaluations determine if a dog's hips are normal or dysplastic.  Normal/Passing OFA hip scores are Excellent, Good, and Fair.  Only dogs with passing OFA hip scores should be bred.  Failing OFA hip scores are: Borderline, Mild, Moderate, and Severe.

PENN Hip:  PennHIP is a multifaceted radiographic screening method for hip evaluation. The technique assesses the quality of the canine hip and quantitatively measures canine hip joint laxity. The PennHIP method of evaluation is more accurate than OFA which is the current standard in its ability to predict the onset of osteoarthritis

OFA Elbows: This tests for elbow dysplasia.  There are various types and severity of elbow dysplasias, all of which can cause lameness of varying degrees.  Dogs who pass an OFA elbow evaluation are rated Normal.  All other ratings are dysplastic. Dogs with elbow dysplasia can lead fairly normal life never showing lameness; however some will be severely lame and may worsen as they age.  Dogs cannot be "normal/good by parentage" for elbows. 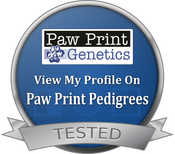