Dogs With Other Jobs 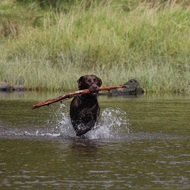 This beautiful chocolate male is Griffin who's dam is our Journey, a Narcotic Detection dog.  Griffin has one of the most unique jobs for a Labrador ﻿~ he herds salmon, Yes indeed he lives full time on a large boat on the pacific coast of British Columbia.  His owner works for the Fisheries going up and down the coast checking fishing boats.  Everybody knows Griffin - the love bug.  Griffin has his own job herding the salmon in the creeks and streams as they are counted.  In the very top picture Griffin is in the middle of doing his job literally .  You can see the large splashed on either side of the photo those are salmon.  The salmon are swarming around in large schools.  This water boy loves his job!  With his stick he 'herds them' for counting and inspection. He alerts to wildlife on his adventures off the boat.