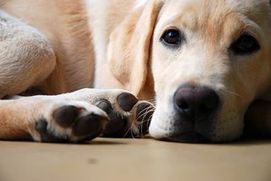 This is an e-mail from a client who has a beautiful four years old yellow Labrador named Libby.  Libby is from our wonderful Labrador Manhattan.

Libby was responsible for saving my life...late January I suffered a series of ruptured ulcers due to another med I was taking for a prior heart condition, I had no knowledge that ulcers had developed in my stomach and thought it was a touch of the flu, as the day progressed so did my weakened state to the point where I could no longer stand up, I lay on the sofa and kept wanting to doze off, each time I dozed off Libby would come and nudge me with her wet nose and lick my face.

It got to a point where I knew it was time to dial 911...long story, short, my caregivers in hospital said if I had gone to sleep I wouldn't have woken up as I had lost and was continuing to lose so much blood internally, I was given 7 litres of saline and 6 units of blood.

Now if we happen to take a walking route past our local fire hall any firefighters who are around come out to pet Libby as she is now viewed as a bit of a local champion because of her actions that evening.

I always knew she was a very special little lady. 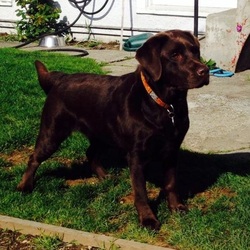 Meet Lou - she is a Brooklyn and Mackenzie puppy 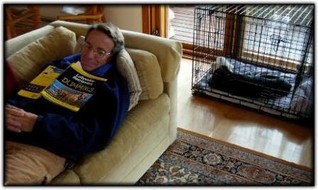 After a morning of hard work by both Dave and Mika, this is what it looks like at our house. 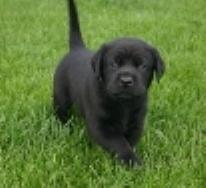 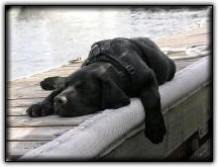 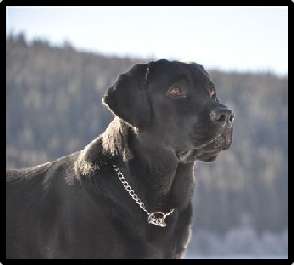 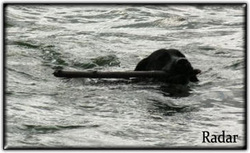 There was a recent picture on a local web site asking if a long black object moving through Lake Okanagan was Ogopogo. I think someone saw Radar who loves swimming even when the lake is at it's coldest. He is obviously a Prince George puppy! The swim is always followed with racing around in the bum tuck position. How invigorating it seems for him! In March he had his first vacation on a farm in Salmon Arm. He was at our Aunt's place while we were in Mexico. Her friends could not believe how calm and well behaved he was for such a young dog. He was so glad to see us when we "retrieved" him that he had to chew up a couple of socks! There is always payback for not being taken on vacation with the family. He continues to get bigger and his paws are huge, especially when you wrestle him and get a smack in the head. He can actually pin your arm using his paw like a hand. He is very resourceful for a dog. He would have made a good canine police recruit except I don't think they let them sleep on the bed! Anyway 9 months and growing...Sandy